In the spirit of reconciliation, Grampians Peaks Walking Company acknowledges the Traditional Custodians of the country throughout Australia and their connections to land, sea, and community. We pay our respects to their elders past and present and extend that respect to all Aboriginal and Torres Strait Islander peoples today. 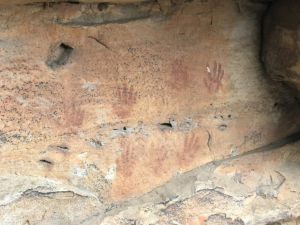 The Grampians is a place that for thousands of years has been known by the Aboriginal people as Gariwerd. It is a significant and protected place that is central to the dreaming of Djab Warrung and Jarrwadjali people, who are the traditional owners of this area. The spiritual landscape of Gariwerd is a place that holds the creation stories that are of great cultural importance. This area also provided an intricate and reliable abundance of water, food and shelter for the Aboriginals inhabiting the land in and around the mountain ranges. Today we hope to gain more knowledge and respectfully educate ourselves on the cultural history of Gariwerd as we endeavour to understand how to assist, and help preserve this diverse and sensitive landscape and it’s original custodians.

“A long time ago, Bunjil (the Great Ancestor Spirit), began work to build the world we see around us. He built the mountains, the plains, the seas, the lakes and the forests. In this world, he created the animals and the plants, so they could live in peace. When he had finished creating the sandstone ranges of Gariwerd, Bunjil would take the form of the eagle, Werpil, in order to view his work from above. Flying over the mountains and the cliffs, he watched the plants and animals he had created growing strong in this world. He listened to the sound of the water; the sound of rainfall and the deep echo of the waterfalls. After some time, he appointed two brothers- the Bram Bram Bult brothers, who are the sons of the frog, Druk. He asked the brothers to finish his work in the creation of the world. They were appointed to name the animals and creatures, to bring them language and organise peace throughout the world. When his work was done, Bunjil rose up into the sky and transformed into a star. To this very day, he remains up there watching his creation from above, as the protector of the natural world.”